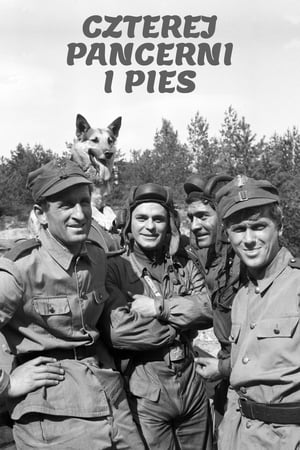 TV Series: Four Tank-Men and a Dog (1966)[1574] Czterej pancerni i pies was a Polish black and white TV series based on the book by Janusz Przymanowski. Made between 1966 and 1970, the series is composed of 21 episodes of 55 minutes each, divided into three seasons. It is set in 1944 and 1945, during World War II, and follows the adventures of a tank crew and their T-34 tank in the 1st Polish Army. Although both the book and the TV series contain elements of pro-Soviet propaganda, they have achieved and retain a cult series status in Poland, Soviet Union and other Eastern Bloc countries.The T-34 tank Rudy with the identifying number "102", a German Shepherd dog from Siberia Szarik and to a lesser extent the crew Jan Kos, Gustaw Jeleń, Grigorij Saakaszwili, Tomasz Czereśniak, and their commander and mentor Olgierd Jarosz, as well as other heroes of the series, have become icons in Polish popular culture.